Wherein I give kudos to the things, people, stuff, and drugs that deserve them this week. Yes, we can transform from P.U.S.S.Y. to posi in a matter of seconds, because lithium rules.

I have long contested that ice scramble with huge amounts of powdered milk (preferably Klim) and brown cow on top is one of the best food around, but it has not really caught on, until some smart entrepreneur brought Manila Scramble to the malls and other stalls and brands started popping up. Stay away from those other toppings, it should just be the pink gunk+milk+brown cow. Or sometimes sago, the tiny ones. Screamingly the mall version tastes exactly like the one in the streets. I’ve noted that mostly old people eat this while walking in the mall, basically because it inevitably has some memory attached to it. I am not making inarte, but these nostalgic bits always pop in my head as soon as I eat ice scramble: 4th year high school catechism, some guy oblivious to the kulangot atop his lip, circumcision, and 2-peso pizza.

For dancing and gyrating and wielding sharp weapons on stage, all while wearing a pair of horns and a pair of wings. We couldn’t get her to do anything back in med school, we couldn’t get her to show up in residency, but now that she is a mighty fellow she can make like a Tuesday Group member and climb atop someone’s shoulders.

“Your vagina would make kaskas to his batok,” I told her while she was lining up in the ATM.

“EEEEEEK!” Thymes screamed. “Don’t call it vagina. Let’s just use the term papaya for it. Papaya, not vagina.”

3. KUDOS to: Mayhem of the Music Meister!

The season 1 Brave and the Bold episode Mayhem of the Music Meister is probably the most wonderful 22-minute cartoon episode of all time! See, I couldn’t even say anything else, I’m just raving. It’s a musical and everyone’s singing, from Gorilla Grodd to Batman to the Black Canary. Everyone. I usually hate musicals, but this is a total hoot. I’ve converted the entire episode into a 22-minute MP3 and am now listening to it incessantly. Pano ka naman hindi mapapakanta pag bumirit na si Clock King, Black Manta, and Gorilla Grodd ng “Drives us bats! Drives us bats! He really drives us bats! Bats! Bats! Bats bats bats bats!!!”

4. KUDOS to: my batchmates

For enduring all the stuff I force feed them to watch. This week, it’s… The Twilight Zone! The magnificent black and white version, with Rod Serling in it! They mostly got bored with it (!!!) but I take it upon myself to spread the good news of The Twilight Zone! We have recently watched the top two episodes of all time: The Eye of the Beholder and It’s A Wonderful Life. This week I will force them to watch the episodes A Howling Man and The Monsters Are Due on Maple Street.

4. KUDOS to: The Human Centipede

Yet another fine choice of movie by HIV, who was also the proponent of Teeth featuring a girl with toothed vagina. This time it’s The Human Centipede, featuring a mad scientist who wants to create a human centipede, basically 3 people attached to each other through an ano-oral anostomosis so there’s only one long digestive system for all three victims. If this happens to me I demand that I be the guy in front. 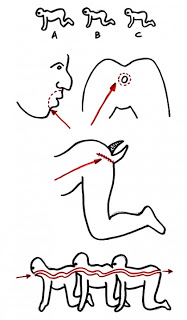