It is with much authority that I declare the 90’s cartoon series Batman: The Animated Series the best TV show of all time. It is not an opinion. It is an established fact, which I have established with authority and certification bestowed upon me by myself. I have recently watched the series again, and it is without question that is a perfectly wonderful series. I love the stories, the 50’s art deco look, the general feel, the voices, the performances, the direction. It has my favorite interpretation of all the characters in the Batman mythos, in particular that of Bruce Wayne, Batman, Dick Grayson, Tim Drake, Barbara Gordon, and Commissioner Gordon. The show brought new life to old but overshadowed favorites like Killer Croc and Two-Face, created new fantastic characters like Harlequin and Roxy Rocket, and introduced me to my favorite tragic villain duo of The Ventriloquist and Scarface.

The first episode I have re-watched after years and years of not having watched the show is Beware The Gray Ghost. In it  Simon Trent, a washed-up actor who used to play a superhero on TV called The Gray Ghost is suspected of re-creating crimes that were originally done in the old TV series decades ago. Simon Trent is aptly and wonderfully voiced by Adam West.

Of course the villain turns out  to be this blonde bespectacled guy Ted Dymer who sells action figures! 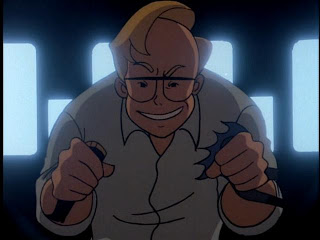 “And I knew what else a toy can do. It can carry a bomb. It can hold a city for ransom. Oh the power of the toy! It can earn millions, millions for the little old toy collector…me!” – Ted Dymer while breaking apart a Batman action figure!

Ted Dymer has one of the best lines in the entire series as he watches his action figure shop explode and burn:

As Ted Dymer watches his toys get reduced to ashes– toys he’s been collecting for years which pushed him to crime!– I could only give him a spiritual pat on the head and tell him: There, there. I understand.