As I’ve been ranting for almost two years now, DC Comics has decided to do a hard reset of its already multiply-reset multiverse, redesigning most of its characters and turning them into horrible clown whores, with the books written by horrible writers and illustrated by horrible artists stuck in the multiple-pocket-polyester-costumed 90’s. Even the once-reliable writers Geoff Johns and Scott Snyder have turned in really horrible work. And this is not me having poor vocabulary—there’s just no other way to describe all the aspects of this movement called The New 52 but bleeping horrible. Bwiset. Marvel, on the other hand, despite doing some annoying stuff like making Cyclops kill—KILL!!!—Professor X, is turning in a much better work. I have always been a DC kid, but sadly, not anymore. Not until they announce that The New 52 has only been a dream, a hoax, a hallucination—and yes, that’s a 60’s Silver Age DC comics reference there.
Which is why I’ve started looking for something else to read. My attention span has severely been damaged by fellowship, so I found it harder and harder to finish fiction novels. So instead of committing to Anna Karenina and other encyclopedic Russian novels, I opted to read something equally profound—Life With Archie. Yes, Archie Andrews. In 2010 a storyline featured Archie 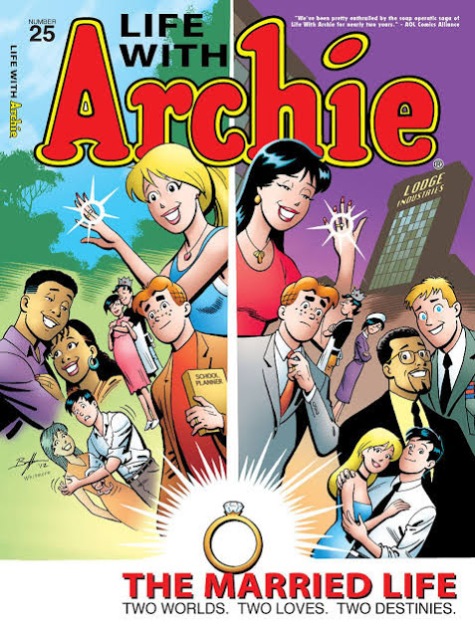 marrying Betty and marrying Veronica in two alternate stories. Life With Archie followed these two different stories of how his life would turn out if he married Betty or Veronica. Two parallel stories in one comic book, with Dilton Doiley as the only character who gets to witness these two parallel universes. It’s wonderful fun, with Mr. Lodge playing the role of the resident corporate kontrabida. The issues follow the pattern of the usual soap-operas, such as The Choklit Shop having financial troubles and on the brink of getting bought out, Moose running for mayor, Archie becoming a struggling musician in the universe where he married Betty, and so forth. In other words, pure comic book fun. So until DC goes back to its pre-New 52 Universe, and Marvel comes up with something that would explain away Professor X’s death (which would be hard considering that the Red Skull got Professor X’s brain and implanted it in his own head. I know.), make mine Archie.