Has finally started. The premise: The DC universe has suffered hundreds of deaths of major and footnote characters alike over the years, and while some (actually, most) of them have been resurrected like Superman and Tora Olaffsdotter, a few have remained dead. The Green Lantern Corps is the peace-keeping corps of the universe, and in recent months we’ve learned that there are actually red, orange, yellow, blue, indigo, and purple corps as well, each one operating on a different emotion in the emotional spectrum. The color bit might seem a bit excessive, cloying, and very 80’s at first, but once I found out how each one is fully fleshed out I realized how they are all actually very cool. But now there is a new corps—The Black Lantern Corps. Black rings are raining down all over, recruiting none other than the dead characters of the DC universe as members of its corps. In the first issue of The Blackest Night we see the first Black Lanterns: Elongated Man, Sue Dibny, The Martian Manhunter, and the dead Green Lanterns from all various sectors. The Black Lanterns need to charge up their rings, and to do so they have to kill people by ripping their hearts off their chests. Excellent first issue, although I doubt if the series, or if anything, can live up to the hype and excitement and build-up that have accumulated over the 2 years we’ve been teased about it. 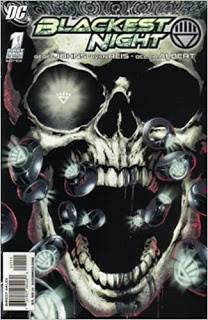 I had my first issue reserved, but as in the case of Jim Lee’s X-Men # 1 released in the 1990’s, I knew there wasn’t any reason to panic—there were boxes and boxes of copies waiting to be bought. Being in a post-duty temporary insanity I also got a copy of the wonderful Superman and the Legion of Superheroes trade paperback also written by Geoff Johns. To top everything off, I also got a plastic replica of a black ring of the Black Lanterns for forty pesos. It was a very cheap-looking, ugly replica, but I wore it in the emergency room in our next duty.

The zombified DC superheroes who are now Black Lanterns have various issues. The Martian Manhunter, for instance, tells Green Lantern Hal Jordan and Flash Barry Allen, who have both been dead for quite some time until they were resurrected recently, “YOU SHOULD BOTH BE DEAD!!!” If those black rings can make their way in our universe I foresee all my mortalities rising up and accosting me and ripping my heart away.