Four people have recently asked me who the fuck my best bud Callistus Netromedev is. This is not an unnecessary expletive, they really asked me, “Who the fuck is Callistus Netromedev?” Callistus has recently re-emerged in a few of my blog posts, but he’s been existing before under the monicker Namtab Pots!. To this question I usually answer: Think of me + encyclopedic knowledge on Vatican history and you have Callistus N. This, however, is not exactly true, so I hereby present, also in conjunction with the launching of his new blog (he had around twenty blogs peppering the net), 5 things about Callistus N (in addition to his wrist watch smelling stunt and ability to write haikus about masturbation):

1. Back in Grade 6 when everyone was doing wrestling moves on everyone Alexander the Fifth did a choke hold on Callistus N. Callistus writhed, struggled, whimpered as he turned blue, but in the end only one thing made Alexander the Fifth let him go: Callistus let loose copious amounts of green, viscous, gooey sipon from his nose. With projectile effect. To this day I am not sure if this was a deliberate defense move or a result only of an attempt to breathe.

2. As the editor-in-chief of our school paper back then I told literary editor Callistus to write an engaging literary series which would run through each issue. He turned in an intricate conspiracy story something about the Vatican and high priests and such. I know only of two people who read it, and it doesn’t include me. One of them, of course, is Feydruta. 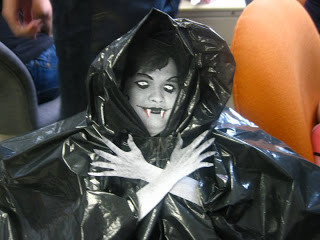 4. Calllistus N. was a major stockholder when we wrote the lampoon, underground, really profane issue of our high school paper and we almost got kicked out when a teacher almost got hold of a copy. Almost, because another trustee, Ruth Marx, would give his life before giving the copy to anyone. Ruth Marx said he would eat the fucking copy to escape persecution. Ruth Marx, I miss Ruth Marx. Callistus and I used to drag him to malls when we would do action figure-hunting, to which Ruth Marx would always remark: “Ayokong sumama sa paghahanap nyo ng tau-tauhan”.

5. Back in 2007 I went to Callistus N’s birthday party really hungry and ready to eat huge plates of food. There was no food, not a single piece of tokwa. He makes up for it by force feeding me huge plates of food every time we see each other (as he is now crazily rich), including the plates.