Yet another self-indulgent entry! When I know for a fact that the few readers that I have have better things to do than read comic books and arrange action figures in their eskaparates! Either way I am taking this opportunity when I am reading comic books again to try and make recommendations because who knows, The Avengers movie or something must have interested you into picking up a funny book! Or dahil mahal naman talaga, download one! My comic book recommendations therefore!

1. Chew- by John Layman and Rob Guillroy published by Image Comics. The book features Tony Chu, a cibopath, ie, he can get psychic impressions from whatever he eats, such as lucid images of the beef getting ground when he eats hamburger, chicken getting beheaded when he eats fried chicken, and such. Practical use: as a police detective he only needs to take a bite of a murder victim and get an idea as to what led to the death. Fun fun comicbook! Grade: A+. 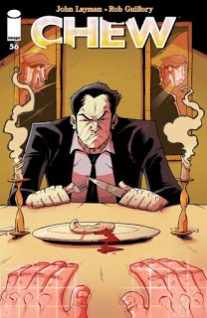 2. Wonder Woman- I’ve been whining about the DC reboot for over a year now, and I’ve skipped on most of them, but now I’m trying to catch-up and it is with much conviction that I declare the Wonder Woman reboot by Brian Azarello and Cliff Chiang totally mediocre. Grade: F for forgettable drivel.

3. Batman: Night of the Owls- Again under the DC reboot mandate, with all the bat books crossing-over and shit to create some sort of “event”. Gotham has apparently been run by a secret cult or such composed of weird people in owl masks for centuries. A lot of exposition on the history of Gotham. Exposition we don’t care much about. The pattern of the cross-over reminds us of The Blackest Night, where the same thing happens in all the books involved except with different characters. Batman is apparently the only character that DC is able to sell, hence we have this Bat-family of books being released in a month: Batman, Batman and Robin, Detective Comics, Batman The Dark Knight, Batman Inc, Batgirl, Batwoman, Nightwing, Batwing, Birds of Prey. Batman can be in all of these books at the same fucking time, plus in Justice League and Justice League International pa. Grade: B for broken promises. Because we thought we would get respite from these EVENTS! We hate events!

So as you can probably gather, out of the three books I’m reading right now I’m only enjoying one of them, so this entry is probably not entirely a recommendation. More like, what else, a whine, a rant, a babble, a testament to the fact that I haven’t had a leisurely, normal conversation with a breathing human being for the entire week. Anybody wanna drink in whorehow?