“Paano gumawa ng poster para sa poster presentation?” I frantically called up Thymes 2 days before the presentation in an event in Taipei. I have a rather different view on academic researches so I had tried to avoid them as much as I could, but eventually invisibility would run out, and like in Survivor people would notice you’ve been flying under the radar for weeks and weeks and conspire to vote you out for being low impact in the next tribal council! But we want the million dollars! Or anything! Hence the franticness. Thymes, a prolific researcher among other things, pointed out some important things like color contrast, fonts, lay-outs, pictures, and such, but as I looked at the clock ticking at 11:45 pm I knew I would have to carry out my original plan.

After a few lay-outing and re-lay-outing and using various colorifications and stuff as suggested by Thymes and various websites, this is how my poster turned out: 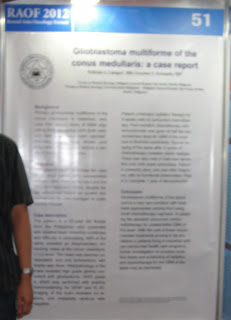 Like… a giant bond paper! AHAHAHAAHAHHAA! When all 60 plus posters were finally mounted I felt apprehensive at first that I had the plainest poster, then noted a Taiwanese poster exactly like mine… minus a logo! For MORE plainness! Katamaran and cramming aside, though, I had really planned to make it as plain and as short as possible because really, whenever I would read posters I only have a two-minute attention span and couldn’t be bothered to read graphs and such. I am of the assumption that other readers have similarly short attention spans, which of course is not true. Or isn’t it. I just find the whole concept of an academic poster strange, most specially one with blocks and blocks of small-fonted paragraphs. We would probably save up on money and non-biodegradable tarp if we would just print out hand-outs for everyone to read. Which is why I should win the next immunity challenge, or they would all vote me out for my, er, radical views.