Because apparently, I only need to put in a token entry and I would no longer be able to shut up again.

HIV has recently dragged us to Tong Yang Hot Pot, which was my first time to eat in these cook-things-yourself restaurants, because not only is it too much of an effort, but they are also dangerous. And true enough, a bullet of boiling oil made pilansik and hit my right eye as I was attempting to fry some squid–of course it had to hit my eye, the same way it is inevitable that I would be hit by the volleyball of kids playing on the street as I am passing them, the same way it is inevitable that the person in front of me in a line in Mc Donald’s would be a mother ordering for her entire family, the same fucking inevitable way that Colby would lose the next individual immunity challenge–yes, I am watching Survivor: Heroes VS Villains as I am writing this, and true enough, Colby’s plates fall on the floor and break. Truly this is not a spoiler, as nobody watches the show anymore, but you all know Colby, the guy who won everything in Survivor: Australia 9 years ago, and is now back in this alumni version. The winner, just in case nobody’s interested, is Sandra, who also won Survivor: Pearl Islands. Survivor: Pearl Islands was running when we were in ICC (sepia, sepia) rotating in OB. Always everything goes back to OB, because all our reminiscences (invented word) must always go back to the vagina.

Back to HIV. This was the time the winner of the IM Biggest Loser was not revealed yet and he didn’t know he was Villar, but he treated us to Tong Yang for something, I can’t quite remember what, HIV would treat us with the slightest provocation, for which I am very, genuinely thankful being poor and all. Untrained and totally moronic my hot plate group placed all sorts of stuff in the soup bowl, I threw in some pechay, BL threw in some fish, Pyro threw in some onions, garlic, leaks, squid, prawn, miswa, and more fish, and we all went back to frying things, faster the other group is already eating while we our meat is still bright red after hours of cooking, faster Pyro can I have that prawn, can I have that prawn please, it looks edible, I want it, I want that piece of prawn damn it!

And after hours and hours of fidgeting and watching the next table with old Chinese ladies elegantly frying stuff with ease and in an organized manner some of the tocino finally looked cooked and I grabbed some. “Wait, the soup,” someone reminded us, I think it was BL, who was perspiring quite profusely as all the steam was blowing in her direction the whole time. We were reminded that nobody has touched the soup, and that it has dried up four times. BL lifted the solid contents of the soup which have all fused and amalgamated together and mutated into some sort of swamp thing and voila, expensive gunk: 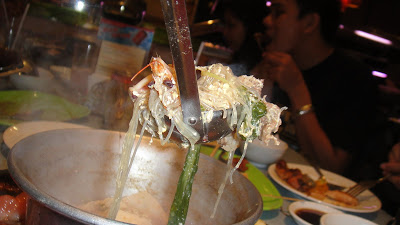