Such Party People In Phuket

Two years ago Smirketh won the grand prize in their annual convention raffle–a trip for two to Phuket for a romantic summer sex-travaganza. In the true spirit of friendship, though, she asked me, Aia, and JP to come with her instead.

“We will set you up with a hot Phuket-an on the beach!” we promised her. We haven’t gone on a vacation in a long time and boy were we ready to party. We haven’t even gotten past the immigration at NAIA and I have already shifted into full juvenile potty-mouthedness mode that would last the duration of the entire trip. “I cunt wait to get to Vagina-keth. Aka Cunt-eth,” I said. It sounded funny at the time.

There was a long lay-over in Kuala Lumpur, so by the time we got to Phuket International Airport we were already quite spent. We were welcomed by our driver, the gregarious Mr. Mongkut, who discussed in detail all the important landmarks we were passing by on our way to Patong Premier Resort. JP, Aia, and I started to doze off–I was actually forcing myself to doze off while clutching the grab handle because Mr. Mongkut was driving like he was on a suicide mission. “Para tayong nakikipagkarera paakyat ng Sagada!” I managed to whisper before passing out. For more dizziness, Smirketh was trapped making small talk with Mr. Mongkut in the midst of our collective vertigo. As soon as we parked Smirketh barfed all the microwaved Pad Thai we had eaten on the plane.

The following day we swathed ourselves in sunblock and trooped to the nearest beach. JP and I started swigging sugar-rich mojitos, whining, “Ang init!”. Smirketh and Aia feasted on fruit cups. In our wetsuits and sarong we were the most over-dressed among the almost-naked Caucasian crowd. “Para tayong naka Sunday’s best,” we remarked. We saw one other Asian girl–she was wearing a wide-brimmed hat and was carrying an umbrella.

While in the water, waiting for the sun to set, Smirketh and I lamented and whined and bemoaned some aspects of our failed romantic and professional lives–we had no idea that in about two years we wouldn’t even be able to go to the beach or eat pineapple rice or slurp tongue-scorching tom yum. That we wouldn’t be able to go anywhere. Had we known, we would have slapped ourselves for being so… shallow. That night we walked by the party area/ red light district along Patong Beach, and in true party people fashion we bought… fried ice cream. We were then swarmed by locals with laminated card boards featuring naked pictures of hot Thai performers. 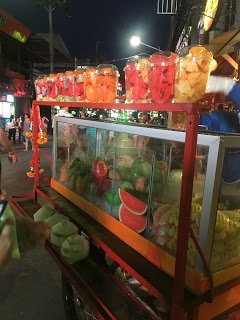 “Laminated card boards featuring naked pictures of  hotThai performers” is a phrase I have come to dread, as this has exhumed long-buried memories of our Patpong misadventures back in 2012. I was with my friends Uni-Horned Beef Jerky Alanis Whore, Kruskalwalis, and Zangief for a conference in Bangkok. After days and days of wholesome picture-taking inside all kinds of temples, or baking under the sun in that melanoma-inducing trap called the floating market, we went to the supposed highlight of every Bangkok trip that we’ve been hearing about for decades. Suffice it to say, we were so traumatized that we stuffed our faces with Swensen’s Ice Cream afterwards. But the true victim that night was my iPad bag that was bulls-eyed and thwacked by the gigantic banana propelled out of the ultra-powerful Thailander Clitoric Propulsion System 3000. Truly my bag has incurred the ultimate stain of immorality. (click link for the sordid details of that trip)

“We are NOT watching any show!” I told Smirketh, Aia, and JP in panic. “Patong and Patpong sound suspiciously similar!” I declared. We walked past the card board carrying pimps and went straight to the non-banana fruit stand instead.