Tales of Lochia And Crap

As I’m typing this Frichmond is probably already post-partum in the recovery room. In true pulmonologist fashion she went on labor last night wearing wrap-around goggles and an N-95 mask– COVID could be hiding everywhere, including in the lochia rubra squirted by the other patients in the area. For some of us who will never give birth our idea of a delivery room will forever be the early 2000’s version of the OB Admitting Section aka OBAS, where everyone is lying next to each other and making chikahan in-between moaning together from painful uterine contractions. Although these are trying times to bring a baby into the world, Smoketh in her infinite wisdom told us the silver lining: that Frichmond could just tell everyone that you are cordially NOT invited to the binyag, bring your own drinks and we’ll drink them together via Zoom for more katipiran.

OB was one of our first clinical rotations and as students we were shookethtd when pregnant patients would start flooding in, usually in the wee hours. Other than what’s written on our small black booklet of laminated kodigo we didn’t really know anything, so we would proudly do scutwork such as inserting a foley catheter to look busy. One midnight I had an obese patient lie down on the examining table, and as I nervously swathed the catheter with KY jelly I could hear my senior resident outside the cubicle screaming my name for MORE utos.

I had to quickly put the catheter in, but I soon discovered that the layers of fat on her thighs and groin make it a very difficult task. After minutes of failing to locate the urethra in pure panic I gasped “Smoketh! Smoketh help! I can’t find the right hole!” Smoketh promptly stuck her head in the examining room “what do you need Will?!”

Obviously there was no need for an army navy, and as someone who knows the female anatomy better Smoketh effortlessly shoved the foley catheter in by herself.

For all the toxicity one thing we can thank the rotation for is that it instilled in us the value of punctuality, ie, if you don’t sign in by 7 am for the summary rounds/conferences you’re sanctioned to have an extra duty and there is no way in hell anybody would want an extra duty. In one of the conferences a resident who has been giving us students a hard time the night before took the podium to present her cases. While presenting she started to panic, stammering and saying things on the mic like:

“Tapos when the patient arrived she was profusely bleeding, and we had to do an emergency cesarian section. Tapos while we were doing the cesarian section we noted a placenta previa totalis. Tapos she also had uterine atony. Tapos I asked the intern to cross-match the blood…”

The irate consultant was not having any of it. She grabbed a microphone and said:
“STOP… SAYING… TAPOS!”

The worst experience I had in OBAS happened when I was a clerk (4th year medical student). I was assigned to get the blood pressure of everyone cramped in the cervical cancer corner, which was beside a tiny comfort room. While making my BP rounds a very pale patient walked out of the bathroom, got dizzy, and in a few seconds would fall down on the floor. I immediately ran to her and caught her from behind like a hero while everyone in the cervical cancer corner screamed in panic. When she was finally assisted back to her bed everyone, including me, screamed even more because from the chest down I was covered in her fresh brown feces ala Tim Robbins in The Shawshank Redemption. I ran–ran!!!— to my dorm covered in human shit and one hour of scrubbing later I somehow managed to resume duty.

“Pahiram ng ballpen, hindi ko mahanap ang ballpen ko,” I asked Intern Ian.
“Andun yung ballpen mo!” Ian said, snickering as he pointed to the rest room.
On the floor of the rest room was a huge mound of feces–the mother feces of the patient who passed out. And there it was–my ballpen impaled on top of the giant shit, like the fucking US flag in Iwo Jima. 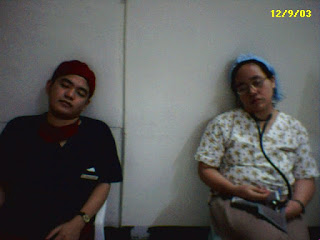 In The Blackest Night mini-series
Was supposed to buy a children's book for my niece but ended up buying one for myself, because how can you resist 2 sheets of stickers inside. Happy ValentiMes! #pink #letlenilead #snoopy #peanuts #charliebrown #childrensbook
As serious, intense cyclists it is imperative that we eat highly calorrific meals, preferably served in fine china and garnished with edible rose petals. Astute commentary on how riding a bike is apparently not like riding a bike by @happymarlim MarissaMd
Providentially my last big bad wolf order has just arrived, and it couldnt get any pinker. #simpsons #thesimpsons #vaultofsimpsonology #bookstagram #lisasimpson #geekchic
My only toys wearing pink: Cat Princess Peach, Cosmic Boy, and the fabulous Prince Adam of Eternia. #pink #amiibo #legionofsuperheroes #losh #silveragecomics #letlenilead #dccomics #heman
As the song All For You by Our Lady Peace goes: Jack Kerouac, K-K-K-Kerouac
Follow Supposed Former Melancholia Junkie on WordPress.com