Home › Blogs › What Broad Shoulders You ALL Have

What Broad Shoulders You ALL Have

Just recently most everyone in the department have (has?) been sporting the black-maroon Department of Internal Medicine jackets brought about by the efforts of HIV who made karir to make sure this would come to fruition despite the disseminated chikinini he has been afflicted with at that time. We are all high school students at heart, of course, so every batch of residency has to have its batch name emblazoned on it, hence we have IM-Perfect and IM-Kebs. It was only recently during a common annoyed state over lunch that we realized what the perfect batch name could have been: IM-Byerna! (exclamation point included). But too late, we are stuck with IM-Perfect. I have long lobbied–LOBBIED!!!–that since I have a kitty (pussy, hee hee) fascination it would have to be IM-Puuuuuuuuuurrrrrfect, but what the heck, that idea was immediately shot down, the same way my idea to turn Graciepoopiloopiroop into a pillar of salt as Lot’s Wife during our first talent show contest was shot down, well we know what happened when that idea was rejected (talagang may grudge pa rin AHAHHAHAHAHA).

Pyro and Tits immediately took to wearing the fucking jackets with much excitement as soon as the fucking jackets arrived. “Panindigan nyo yan,” I said as we walked out of the airconditioned callroom and into the blazing afternoon. In fairness to them, pinanindigan talaga. 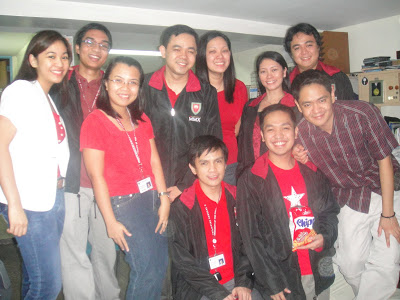 So far we’ve been getting good reviews for the jackets:

“In fairness, REVERSIBLE!”- Pyro, Frivolous Fascist of Fashion
(as the jacket could indeed be worn inside out and you would look totally maroon)

But the process that led to the creation of this awesome, awesome jacket was not without emotional consequences. While getting measured for it I immediately checked out the list of measurements of everyone.

Back when I was growing up when all sorts of weird things were supposed to be happening to the male physique one of my favorite afternoon readings was some teen-age encyclopedia of sorts where they explain science in supposedly simple and interesting terms. I distinctly remember a paragraph which said, “an adolescent male would notice that his voice becomes deeper and that he develops what is usually called the adam’s apple. He would also note that huge amounts of facial hair would start to grow and that his shoulders become broader”. To all of those points, all I can say is, AHAHAHAHAHAHAHAHAHAHAH!

a personal blog of a bewildered teacher